Although the Newberry has a complete collection of Chicago city directories, there are no directories in the microfilm drawer (or online) for 1918-1922 or for 1924-1928.

The absence of these directories is noted in the introduction to Polk’s Chicago Directory for 1923. This directory was “The first Chicago City Directory published by R. L. Polk and Company. It is the 71st edition of the directory and the first issued since 1917.”1 A contemporary headline in the Chicago Tribune read “City Population Is 2,9 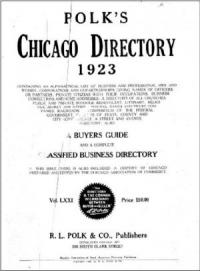 Prior to 1887, a variety of publishers issued city directories. From 1887 until 1917, the directory was published under the management of Reuben H. Donnelley. Following the publication of the 1917 edition, Donnelley found it necessary to use the directory staff in other capacities. Staffing issues along with conditions arising from World War I caused Donnelley to cease publication of the directory. He ultimately induced the R. L. Polk & Company to resume the annual publication. Polk had been publishing directories in other locales since 1871.3

Another gap followed the publication of the 1923 directory and the next directory was not issued until 1928. A December 1928 Chicago Tribune article announced the “...first city directory issued in five years,” again by R. L. Polk & Co. This was a two-volume publication, with the first being “all that a good directory should be, offering cursory information as names, addresses and occupations, together with a classified business directory.”4

The second volume was alphabetically arranged by street (now referred to as a “criss-cross” directory) and provided the names of householders or businesses at each address. It also provides details as to home ownership, wife’s name and business connections.5 This second volume is available on the Chicago History Museum’s website.

Although Polk directories for other cities continue to be published, this was to be the last of the Chicago city directories. Following 1928/29, telephone books (which started in 1878) are the primary alternative available to researchers. The Newberry Library City Directory Collection Guide lists the library’s holdings for both city directories and telephone books.