Chicago Directories in the 1870s 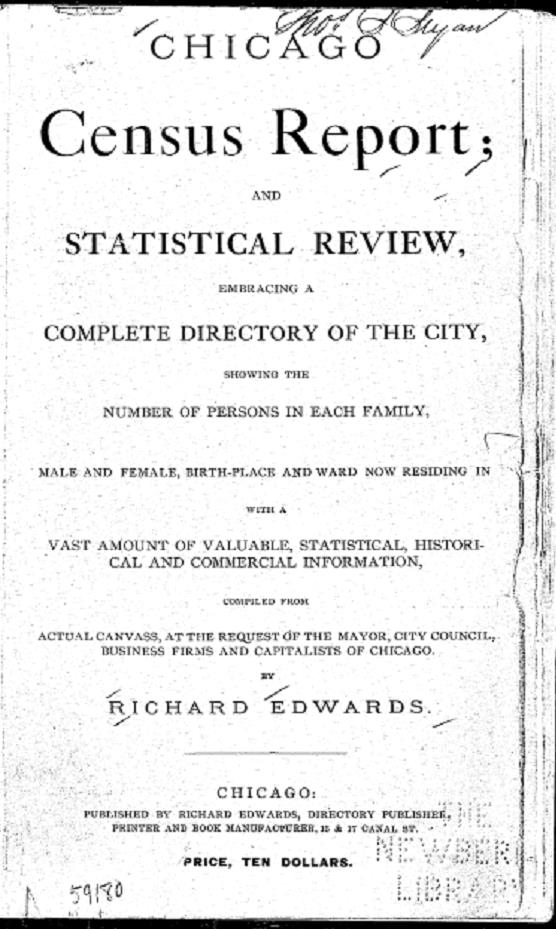 Chicago city directories were issued in 1870, 1871, 1872 and 1873, making it appear as if the publishers never skipped a beat following the Great Chicago Fire on October 8, 1871. But, while tracing your ancestors during this time frame, have you wondered exactly when these directories and the 1871 “Edward’s Census” edition were printed? And, more importantly, when was the information collected?﻿

City directories do not always provide this information, but after some newspaper research, here is the chronology for this series of directories published by Richard Edwards:

1870
Edwards’ Directory of the Inhabitants, Institutions, Incorporated Companies and Manufacturing Establishments of the City of Chicago…for 1870, (Newberry reel #5). This census for this 13th edition was done in May and the directory was published in July 1870 (Chicago Tribune, May 1, 1870﻿ and Chicago Tribune, July 17, 1870).

Edwards’ Annual Director to the Inhabitants, Institutions, Incorporated Companies, Manufacturing Establishments…in the City of Chicago for 1871 (Newberry reel #7). The canvass for this 14th edition was completed in November 1871 and the volume was published in January of 1872 (Chicago Tribune, November 14, 1871 and January 6, 1872).

1872
Edwards’ Directory of the Inhabitants, Institutions, Manufacturing Establishments, Incorporated Companies of the City of Chicago… for 1872 (Newberry reel #8, item 2). The 15th volume was published in August of 1872 (Chicago Tribune, August 16, 1872).

1873
Edwards’ Chicago Directory Containing the Names of All Persons in Business in the City Whose Location Could be Ascertained up to January 20, 1873. Also known as the “The 1872-1873 Extra Edition,”  this edition was published in February 1873 “embracing thousands of changes and removals” (Chicago Tribune, February 16, 1873).