Kelvyn Park High School was named for the community and is one of the few schools in Chicago that is not named after a famous person.

Laughlin Falconer, (the elementary school at 3020 North Lamon in Chicago is named after him) came from Scotland in 1844 and settled in the Jefferson area in 1848. A settlement of immigrants from Scotland developed. They called the neighboring grove Kelvyn Grove in memory of Kelvin Grove, a lovely wooded area in Glasgow.

The original Kelvin Grove school property, which was at Cicero and Montana and originally in the town of Jefferson, was acquired on February 8, 1857. The deed stated "that a building shall forever be maintained and kept up as a free school for the said district upon said premises." This building operated as the Kelvin Grove school until 1911 when it became a branch of Lloyd Elementary school.

In 1866, Samuel Snowden Hayes, a realtor, purchased a large farm in this community. In 1873-1875, he subdivided the land, which extended from Kostner to Cicero and Fullerton to Diversey, and called the subdivision "Kelvin." Mr. Hayes hoped to bring the State Industrial College to the area and laid out Hayes Boulevard (Wrightwood Avenue) as a beautiful parkway leading to the college. The school, which became the University of Illinois, was built instead in Urbana.

In 1886 residents and property owners of a square-mile section at the southeast corner of the Town of Jefferson petitioned to be annexed to the City of Chicago. The area, just northwest of Western and North Avenues, was already effectively settled as an extension of the north side of the city. The rest of Jefferson joined the city of Chicago in the great annexations of 1889.

The building at Cicero and Montana was taken over by the Chicago Board of Education when Jefferson was annexed in 1889 and placed in the fourth group of grammar schools.

Many years passed and the area became an urban community. Additional educational facilities were needed. By 1917, a branch of the Nixon School, consisting of about twelve portables, was located on the south end of the present Kelvyn Park High School campus.

On December 5, 1917, an additional appropriation of $30,000 was made to the original appropriation of $285,000 for the construction of a permanent building that would serve as an elementary school for the children of the area and as a community center for the adults. It was completed and opened on March 17, 1918 and took its official name, Kelvyn Park Elementary School, in September of that year. The attendance area boundaries were Belmont, North, Kedzie and Cicero avenues.

By 1925, Schurz High School was over crowded; so a junior high school, grades 7, 8, and 9, was established at the school at Wrightwood and Kostner. (Some sources state that a 9th grade branch of Schurz was opened at Kelvyn Park as early as 1921).

To provide a better educational facility for the junior high school, two wings were added to the building in 1929-1930. They contained a swimming pool, two gyms, locker rooms, science labs, art rooms and additional classrooms.

Wishing to leave a gift to the school, the January 1933 graduates commissioned a local artist, Edgar Miller, to create some stained glass panels. The present whereabouts of these panels are unknown.

In 1943, the Chicago Board of Education closed the school at Cicero and Montana (then part of Lloyd School) and leased it as a car lot. The building was subsequently demolished.

In the mid 1960's, the science labs were remodeled and other rehab work done. Mrs. Abe Saperstein donated money to the school to renovate the auditorium as a memorial to her late husband, who had founded The Harlem Globetrotters. At that time, the assistant principal was Philip Brownstein, who was also the head scout for this team. Mr. Brownstein passed away in 1999 at the age of 92.

In the 1980s, the auditorium was updated again. It was redecorated, a new curtain was added, and the old seats were placed. In 1985, the studio art class and the Art Club painted a mural on the rear wall. The cafeteria was modernized in 1984 and the Home Economics Department in 1987.

In 2002, a $33.8 million contract was approved for Kelvyn Park South High School to be built at 4338 West Wabansia Avenue (corner of Kildare and Wabansia in West Humboldt Park.). Construction was completed in 2004. 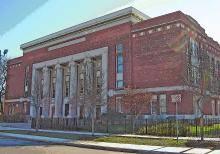 Permalink Submitted by Rolfe Jaremus (not verified) on Thu, 2018-10-18 21:02
Nice article! I spent the first 9-1/2 years of my life in Kelvyn Park (2426 N. Kildare) where my grand parents had a large two story home (was at 2424 N. Kildare) that my grandfather told me was moved to the property when a local school was built. We’re houses moved to make room for Kelvyn Park High School?